This was a short introduction trip for my 8 and 9-year-olds. They’ve been backcountry in the past as passengers with my wife and me, but this was an opportunity to get them involved in more of the work and to carry a load while out in the woods and water. This was a slow-paced and relaxing trip with plenty of camp time and swimming, paddling and fishing in the water adjacent to the camp.

All in all, this was a pretty smooth trip and successful in getting the kids working without overwhelming them. A bit of a challenge on the paddle in, but once we got there we had the southeast arm of the lake all to ourselves to swim, fish and explore. 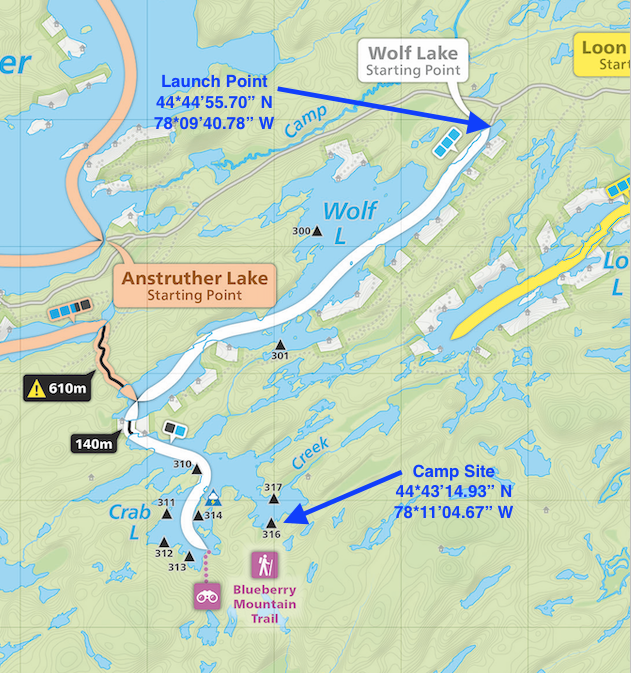 Traditional Territory: This route takes place on the traditional territory of Mississauga and Anishinabewaki ᐊᓂᔑᓈᐯᐗᑭ (source).

Permits: Print two copies: one for the car, one to carry (though nobody ever asked for one).

Outfitter: We rented a canoe from Kawartha Adventure Rentals, which included delivery to Wolf Lake access. They were very helpful and accommodated an early pickup on the last day, when we got in at 12:00 rather than 3:30 (to beat the incoming wind).

I worked out a menu in advance with the kids to try to get the buy-in of occasionally picky eaters and get them excited to help cook.

This was a tough-ish paddle into the wind. Two adults could get from launch to camp in probably an hour if they wanted to. Into the headwind, it took roughly two hours of pretty strenuous paddling with a kayak paddle for me (the kids were largely decorative on this leg of the journey).

The route is simple to navigate, following the left shore of Wolf Lake to the portage. Then it’s an easy portage from Wolf Lake to Crab Lake (140 m) – so short even the kids didn’t complain. The kids carried their own clothes and sleeping bags on their backs, plus all the paddles and the food pack. From the portage, it is a straight shot southeast on Crab Lake to the campsite. We passed a couple of cottages and 3-4 other campsites on the way.

Campsite: Site 316, in the southeast corner of Crab Lake. It’s a nice campsite with a couple of rocky canoe landings, and a short easy climb of about 15 feet to the firepit (a nice metal ring with a heavy, hinged grill), benches on one side of the fire, and a picnic table overlooking the lake on two sides. The tent pads were roomy, squeezed between a hill and the bottom end of the lake leading to a small marshy area. I was a little worried that the tent pads might flood, but we got pretty heavy rain on night one with no issues. The upside of this spot is that the hill shielded us from direct sun in the AM (no baking in the tent at 6:30) and we got to watch the sunset over the water from the tent in the evening.

I’m used to chipmunks trying to get into any food that’s left out, but that wasn’t an issue on this trip. No chipmunks (or mice or squirrels) to be seen, but lots of circling hawks woke us up each morning. The wildlife highlights at the camp were a Blue Heron that spent a lot of time each day fishing in the marsh and the islands around us, and what we think was a mink swimming past us and into the marsh. The caterpillar situation is currently pretty intense. Caterpillars on every branch in sight, and the sound of their frass falling on our overhead tarp at night gave the illusion of nearly constant light rain. At this site, the trees looked to be in decent shape, but on the way in there were birches stripped of nearly every leaf.

The thunderbox was way up top and a slippery climb up and down after the rain. Possibly too difficult for some, as we did come across “tp-flowers” here and there.

I had a tough time finding trees appropriate for a food hang and ended up just putting the food inside Ziplock bags, a metal mesh rodent bag, and then inside our water-tight canoe pack and strapping the whole thing to a tree as best as I could. No evidence of any animals attempting to get in through the three nights.

We stayed on site 316 for 3 nights. Mostly we spent the days paddling, swimming (floating), and fishing off the rocks (no luck catching fish from shore, but we did catch bass from the canoe just 40 or 50 feet off). At camp, the kids had water & firewood duty, helped cook, and took care of the dishes afterwards.

We’d had a plan to head to Blueberry Hill just around the bend to hike up to the plateau, but each time we were about to do it we saw threatening clouds and thought better of it. There was a forecast of thunder and lightning and rain on and off throughout, but we got lucky and several nasty-looking fronts just missed us with plenty of thunder in the distance. We did get rain, but nothing near the 30-50mm that had been in the forecast, and we ended up with lots of sun, but never for more than a few hours at a time.

After dinners, we found a routine of a swim, cards, drawing and stories in the tent watching the sunset. Unfortunately, all 3 nights were overcast and we didn’t get any stars at all.

With some bigger winds in the forecast for the afternoon, we wanted to be off the water by lunch. This still gave us enough time for a lazy oatmeal breakfast, a quick swim, and we were packed and off by 10:15 am. It was a MUCH easier paddle this time. That same wind we fought on the way in was at our backs on the way out. Smooth and easy and we were back at the access point before noon without too much of a struggle.

I lucked into a few things that worked out really well.

1 – Bringing the kayak paddle was a last-minute decision that was a HUGE help. I don’t know how long the paddle in would have been without it, but I’m sure it would have been more effort and a slower pace.

2 – The kid-selected menu was great. No chance for a “yuck”, and they were into helping at mealtime.

3 – I told my kids they should bring a few games and they dropped the ball, but with only a deck of cards, a book, and a drawing kit (no board games, etc) we had a great time!

I was initially worried that I’d given them too little to do but was also struggling to think of more places they could be helpful. They helped with the tent set up, but couldn’t do much more than watch the tarps & hammock go up. I think it worked well to ease them in though. Challenging them is good and small successes are good, but frustration isn’t, and I think I would have gotten frustration if I asked much more of them on their first trip.

Just a dad with limited camping experience. I grew up a block from the water and barely ever touched it, trying to do better by my kids.

Please confirm you want to block this member.

You will no longer be able to:

Please note: This action will also remove this member from your connections and send a report to the site admin. Please allow a few minutes for this process to complete.

You have already reported this .